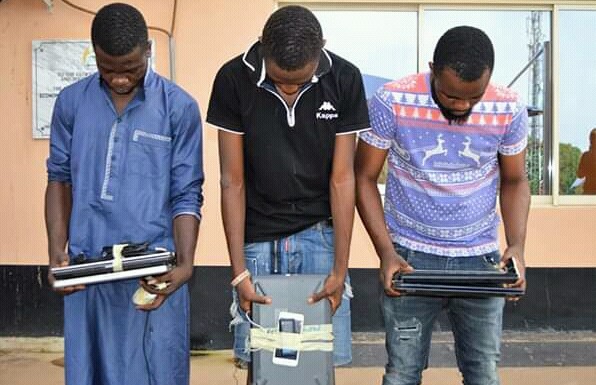 The economic and financial crimes commission, Ibadan zonal office has arrested three suspected internet fraudsters and two others for being in possession of double barrel gun.

The suspects were picked up at Olorunsogo and Olodo area of Ibadan, Oyo state capital after days of surveillance mounted on them to test the veracity of allegations of fraudulent activities and flamboyant lifestyle without a tangible source of income levelled against them.

As at the time of arrest, Biola who claimed to an undergraduate of the Polytechnic Ibadan was in possession of one 2006 Toyota Camry, two laptops, 1 iPhone X, two internet modems and one smartwatch.

Sources at the anti-graft commission's office in Ibadan disclosed that they will be charged to court as soon as investigations are concluded.

His arrest was in line with the presidential order on withdrawal of licensed firearms and short guns.

EFCC preliminary investigation revealed that the license allegedly obtained for the guns was inconsistent.