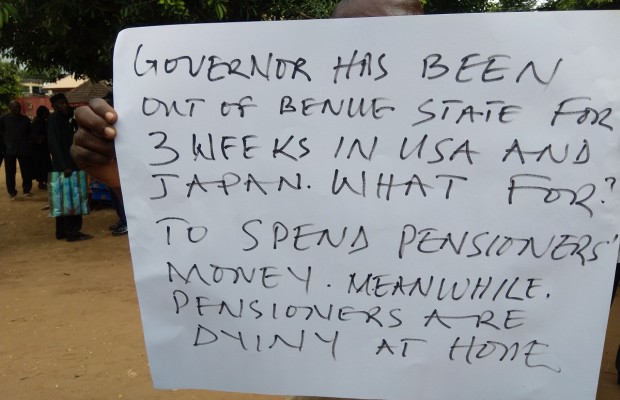 Pensioners numbering over two thousand from the 23 local government areas of Benue State have staged a peaceful protest to demand their unpaid pensions and arrears for over 20 months.

The pensioners took to the street of Makurdi in protest with leaves, placards, sleeping mats before storming government where they barricaded the entrance gate preventing people from going out.

Chairman of the pensioner Mr Peter Ikyaado, who led them says they will remain at the gate until the government pays even if is one month's arrears, saying many of them are dying.

The Pensioners while lamenting government insensitivity on the plight of senior citizens who are supposed to be on first line charge, said all they want is for the governor to pay them as they are tired and fed up with his promises.

While chairman of the pensioners promises to remain at the government house gate indefinitely with his followers until government answers them says the government is been reluctant. Meanwhile, the Chairman State Pensions Commission, addressing the pensioners says they are exploring ways to pay and solicited their understanding.