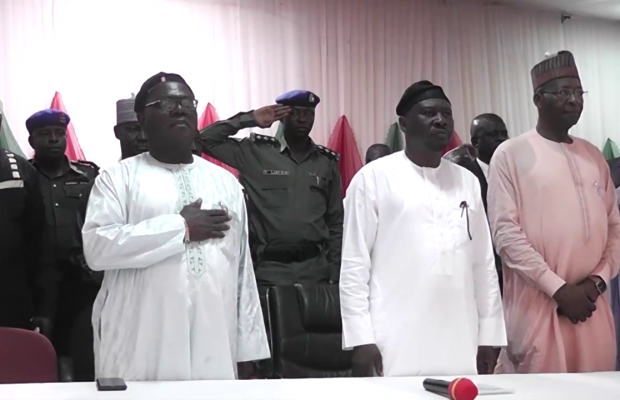 Governor Ahmadu Fintiri received State Chairman, alongside the entire Social Democratic Party SDP members who collapsed the structure of their party and defected to the ruling People's Democratic Party PDP in Adamawa.

At a ceremony which held in the Banquet Hall of the Government Yola, Governor Ahmadu Fintiri while addressing the defectors congratulates them for joining the party and assured them of equal treatment by his administration.

Governor Fintiri explained that the defectors also have equal right to vie for various offices in the forthcoming local government elections under the umbrella of the PDP.

He said in less than two months of his administration, he has restored the lost glory of the state and  virtually achieved all the eleven points agenda he promised the people of Adamawa during the electioneering campaign

Speaking during the event, the State Chairman of PDP Barrister Tahir Shehu welcomed the entire members of SDP into the PDP and pledged to carry them along in the affairs of the party

Earlier in his remark, the former State Chairman of SDP John Muva said they decided to collapse the entire structure of SDP in Adamawa into PDP considering the achievements of Governor Ahmadu Fintiri in less than two months of his assumption in office.

Muva promised that they will give their total support and loyalty to the Fintiri led administration for Adamawa to forge ahead.