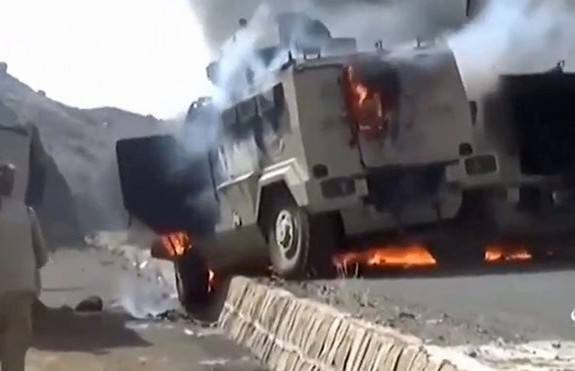 Yemen's Houthi rebels on Sunday broadcast footage they said was of a major attack into Saudi Arabia that killed or wounded 500 soldiers with thousands of others surrendering.

Yehia Saree, a Houthi military spokesman, described an ambush on the Saudi forces that then developed into a "all-out" cross-border offensive that trapped the troops inside Saudi Arabia.

The fighting took place in the southern region of Najran with video images aired showing armoured vehicles hit by blasts and surrendering soldiers. Saudi Arabia has not yet responded to the Houthi claim.

Saree said the offensive 72 hours earlier had defeated three "enemy military brigades", leading to the capture of "thousands" of troops, including Saudi army officers and soldiers, and hundreds of armoured vehicles. He did not give a day for when the footage was filmed.

The video showed armoured vehicles, some ablaze, with stencilled Saudi markings, along with large piles of weapons and ammunition the rebels say they seized.

The images also appeared to show bodies and men in Saudi military uniforms. Several identified themselves as Saudis