South Africa Marks 20 Years Of Freedom Ahead Of Election 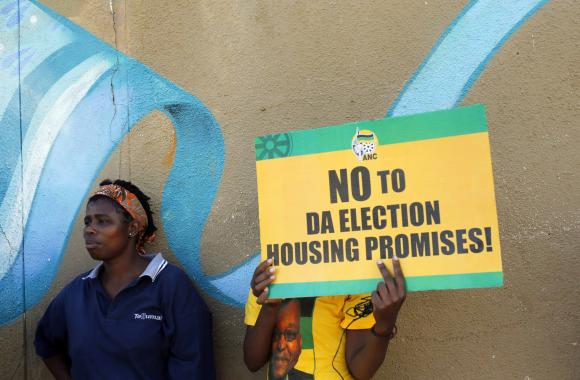 Supporters of President Jacob Zuma's ruling African National Congress (ANC) await the start of a march on the headquarters of the opposition Democratic Alliance in Cape Town, February 5, 2014.

Supporters of President Jacob Zuma's ruling African National Congress (ANC) await the start of a march on the headquarters of the opposition Democratic Alliance in Cape Town, February 5, 2014.

South Africa marked two decades of multi-racial democracy on Sunday, still feeling the loss of Nelson Mandela and in somber mood just 10 days before elections which are expected to keep the African National Congress (ANC) party in power.

Sunday's celebrations held a special poignancy as this is the first "Freedom Day" since the passing of Mandela, the anti-apartheid icon who died in December at the age of 95.

His name was evoked several times by South Africa's current president Jacob Zuma during a ceremony attended by around 5,000 people under bright autumn skies outside of the ornate Union Buildings, the seat of government.

"Our country continues to contribute to building a better Africa and a better world, building on Madiba's legacy," Zuma said, referring to Mandela by his clan name.

The ANC under Zuma has seen its star fade since the heady days of the liberation struggle against white domination and the one term in office served by Mandela, who devoted his formidable charisma and charm to the cause of racial reconciliation.

A cartoon in the Sunday Independent newspaper depicted a black female voter happily putting a check mark on Mandela's picture in 1994 next to the letters ANC. In 2014, the same woman angrily marks an X over Zuma's picture.

Critics say graft is widespread and that many ANC politicians are more interested in self-enrichment than service.

"For most South Africans things are not as clear as they were back in 1994," the Sunday World newspaper, which has a mostly black readership, said in an editorial.

"Now we face the cold hard facts of corruption, condescension and naked contempt from those in power."

Zuma himself is in the spotlight because of security renovations worth over $20 million that were made on his private rural homestead which included a chicken run and swimming pool.

South Africa's top anti-graft watchdog, the public protector, said in a report last month that Zuma should pay back some of the money spent on the upgrade.

Those polls capped years of nail-biting political negotiations and civil strife which pushed South Africa to the edge of an all-out racial war. The fact that the election was held at all was widely hailed as a miracle.

Bringing about the end of apartheid, the 1994 election also ushered in two unbroken decades of ANC rule which is almost certain to be extended when South Africans vote on May 7 in the country's fifth all-race general election.

Poor black townships are seething with rage and marked by frequent riots as the frustrated and unemployed protest against the economy's failure to include them and the government's failure to bring them basic services such as water or power.

The government can point to real successes, such as a fast-growing black middle class and the laying of the foundations of a welfare state with 16 million poor people, about a third of the population, now receiving monthly income grants.

Millions who previously had no proper roof over their head have had houses built for them which are plugged into the grid.

Zuma noted that 83 percent of households now had sanitation compared to just half in 1994 and that the government had built close to 3 million homes over the past 20 years.

"Most people have houses, electricity, and all those basic things, the ANC has brought a lot of change in our lives," said Njabulo Shabalala, 29, an unemployed man who told Reuters he planned to vote for the ruling party.

Pretoria was also conferring National Orders, its highest honor, on Sunday to individuals who have made contributions to the nation. Among those honored is British musician Jerry Dammers, who wrote the 1980s song "Free Nelson Mandela".