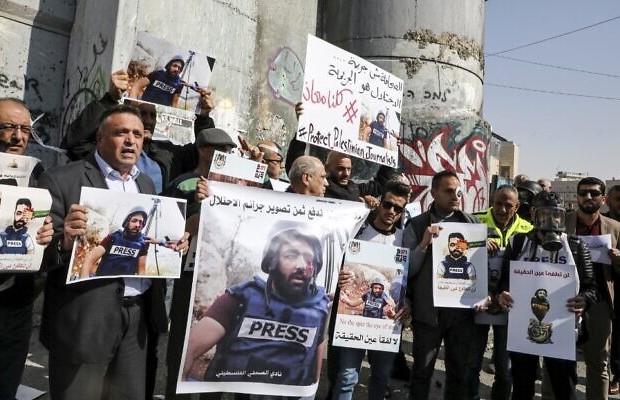 Israeli forces in Bethlehem have fired tear gas at Palestinian journalists protesting against the wounding of a colleague by apparent Israeli fire, an incident that sparked outcry among media workers in the occupied West Bank.

Palestinian freelance photojournalist Muath Amarneh has been in Hadassah Hospital in Jerusalem since being hit in the eye on Friday while covering a protest in Surif, close to Hebron.

Amarneh said he was some way from the protesters when he was struck by what he believes was Israeli fire. A video from the incident posted online showed Amarneh being carried off by other journalists while bleeding from his left eye.

Relatives were quoted as saying by The Associated Press news agency that doctors had informed them Amarneh lost vision in his eye, but hospital officials could only confirm that he suffered a "serious" injury.

Israel's border police said it did not target Amarneh in Friday's protest, The police said it only used "nonlethal" means to disperse the crowd. Palestinian President however, spoke to Amarneh on the phone and condemned the shooting, pledging to ensure he gets the best medical care for his injury.