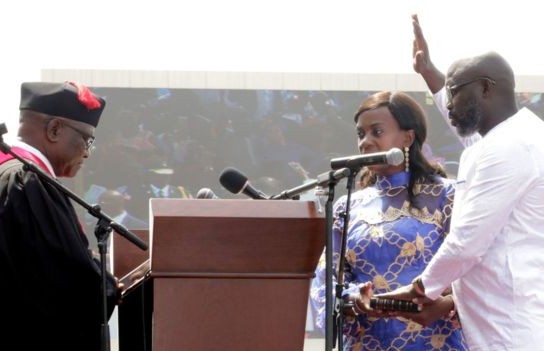 African football  legends  were among the world  personalities who witnessed George Weah’s historic  inauguration  as Liberia’s 25th president in  Monrovia on Monday.

Austin Okocha,  Sunday Oliseh,  Samuel Eto’o  and Didier Drogba  were inside the Samuel Kanyon Doe Stadium to honour  the continent’s most decorated footballer.

Liberians queued for miles to see the inauguration, celebrating their country’s first peaceful, democratic transition of power in 47 years by dancing as they waited.

Expectations are sky-high for Weah, who grew up kicking a ball about his poor suburb of Monrovia and became an international star through a distinguished  career at  Monaco,  AC Milan, Chelsea and Paris Saint-Germain.