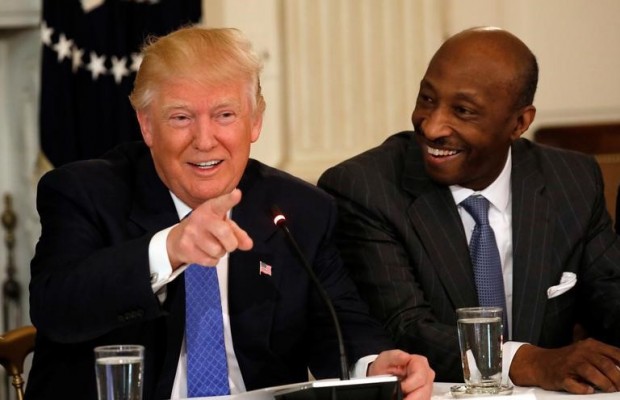 The CEO's of Intel Corp (INTC.O), Merck & Co Inc (MRK.N) and Under Armour Inc (UAA.N)  have resigned from the U.S. Manufacturing Council on Monday, following Trump's initially tepid response to weekend violence at a rally of white supremacists in Charlottesville, Virginia.

"I resigned from the council to call attention to the serious harm our divided political climate is causing to critical issues...," Intel Chief Executive Brian Krzanich said in a blog post.

Kenneth Fraizer, the chief executive of drugmaker Merck and an African-American, said he left the advisory council because of the president's reaction after the violence between white supremacists and counter protesters. Frazier cited the need to "take a stand against intolerance and extremism."

The AFL-CIO, a federation of labour unions that represent 12.5 million workers, said it was considering pulling its representative on the committee.

After the white nationalist rally turned deadly on Saturday, Trump initially said that many sides were to blame. On Monday, in a statement, Trump denounced neo-Nazis and the Ku Klux Klan as criminals and thugs, bowing to mounting political pressure as critics assailed him for not singling out white supremacists.

The CEO of Under Armour, Kevin Plank, announced his resignation from the council in a Twitter posting. "We remain resolute in our potential and ability to improve American manufacturing," said Plank. "However, Under Armour engages in innovation and sports, not politics."

Plank was criticized last winter by some of Under Armour's biggest stars over his support of Trump, comments that basketball star Stephen Curry echoed.

The demonstration in Charlottesville by hundreds of white nationalists took a deadly turn on Saturday when a car plowed into a group of counter protesters and killed one person.

Trump responded shortly later in a tweet, saying, "Ken Frazier of Merck Pharma has resigned from President's Manufacturing Council, he will have more time to LOWER RIPOFF DRUG PRICES!"

Trump doubled down on his attack later in the day, tweeting that Merck "is a leader in higher & higher drug prices while at the same time taking jobs out of the U.S. Bring jobs back & LOWER PRICES!"