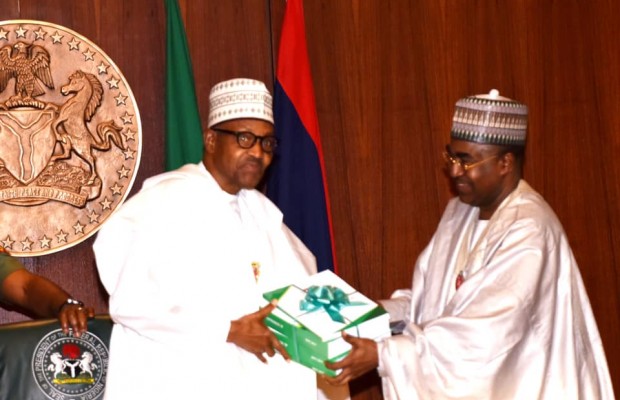 President Muhammadu Buhari says winning the war against drug abuse remains one of the critical elements of the Next Level mandate of this administration.

Receiving the report of the Presidential Advisory Committee on the Elimination of Drug Abuse, PACEDA, at the State House, Abuja, Friday, President Buhari reiterated the commitment of the government to the welfare of the citizenry by fighting the scourge of drug abuse.

President Buhari, however, realising the enormity of the menace, solicited for the cooperation of all and sundry.

He called on all well-meaning Nigerians and international partners to join hands with relevant government agencies in the fight against drug abuse.

While thanking the committee for its timely and diligent prosecution of the assignment, the President assured that the matter was of utmost importance, and the report would be studied along with the recommendations.

Earlier, the Chairman of the committee, Retired Brigadier General Buba Marwa told the President  that since the committee was inaugurated in December 2018, it interfaced with a wide spectrum of stakeholders including Ministries, Departments and Agencies, Non-Governmental organisations, Civil Society Organisations, Faith-based Organisations, professional bodies, international partners and members of drug user communities with their parents, teachers and caregivers.

He added that the assignment, which took members to all the geopolitical zones of the country, confirmed the fears of President Buhari that Nigeria had a very strong drug problem that needed to be tackled as a national emergency.

Marwa said the key to tackling the menace is a formal launch of a War Against Drug Abuse (WADA) as part of the declaration of a state of emergency on the menace as well as the establishment of a National Drug Control Commission.